With inflation rates continuing to rise and a global recession on the cards, CIOs are becoming increasingly tasked with evaluating, justifying and reducing IT spend. In fact, one such area of focus is the amount being spent on software-as-a-service (SaaS) applications — 12.7% of total spend in many modern organizations.

But while this offers a huge opportunity for businesses to streamline their SaaS stack and cut back on costs, it can’t be ignored that it is also this area of spending that is almost immediately impacted by the rise in inflation.

What do we mean by this?

Well, with as many as 88% of software vendors including clauses in their contracts that allow them to increase their pricing at any given time, they are effectively in a position to pass on their own rising costs to their customers.

So, what’s the solution? How can you keep your spend to a minimum in the face of soaring inflation rates?

In short, by understanding the true impact of SaaS inflation and by arming yourself with leverage.

Here’s everything you need to know.

The true impact of SaaS inflation

According to Gartner’s VP Analyst, Robert Neagle, when it comes to preparing for the impact of inflation on IT spending, CIOs have three choices:

But what if you could spend the same and do more? Or spend less and do the same?

We believe you can. In fact, there are almost certainly opportunities for you to drive down the cost of your SaaS stack. For this to happen though, you firstly need to understand the actual impact that inflation is having on software pricing.

Having analyzed more than 10,000 SaaS contracts, we found that 74% of vendors increased their list prices since 2019. But while this is to be expected, what we also found was that the SaaS inflation rate is around four times higher than the market inflation rate.

More specifically, SaaS spend in the UK and Australia is rising at a rate that is five times higher than market inflation. While in Canada and the US it’s slightly less than this, Canadian organizations are still paying 4.3 times more for SaaS than inflation alone can account for and 3.5 times more in the US.

So, what exactly does this tell us?

In short, that despite SaaS pricing inflation rapidly outpacing market inflation, many software vendors are continuing to use inflation as a scapegoat for their soaring prices.

Using this insight to your advantage

Knowing how SaaS inflation compares to market inflation can give you greater leverage during your vendor negotiations. Jo Ann Rosenberger recommends that you ask vendors to explain exactly why they’ve hiked up their prices and whether the extent of these annual software price increases are justified. “These vague and general answers can in no way serve as sufficient detail to explain or justify the fairness of these unexpected increases that result in hefty budget overruns”.

Ultimately, by arming yourself with this economic data, she claims that you will be in a much stronger position to make informed counteroffers. It is, however, important that you’re giving yourself ample time to use this leverage to negotiate new terms.

The bottom line is, many SaaS companies rely on their customers renewing their subscription — often at an increased rate — in order to boost their revenue, which is why as many as 89% of them have auto-renewal clauses in their contracts.

It’s therefore crucial that you know exactly which of your contracts include this clause and what the notice period is for terminating or amending the contract, should you wish to.

But although understanding this economic data can give you some much needed leverage to secure better contract terms, it isn’t the only way to cut your SaaS spend.

How to mitigate against inflation’s impact on your SaaS budget

While there’s no doubt that inflation will impact your IT budget, there are ways you can mitigate some of its effects.

Get a handle on your true SaaS spend and usage

Before anything else, you need to gain visibility of your entire SaaS stack. This involves identifying all of the SaaS applications that are being subscribed to by your business.

You should specifically seek to understand:

Once you’ve got visibility of your organization’s technology stack, you can begin focusing on ways to control SaaS spend and increase efficiencies.

But what does this entail?

Build a SaaS system of record

Effective spend optimization requires total oversight of your SaaS stack, which is only possible when you have a system of record in place.

It’s not enough just to catalog your organization’s software applications though, you also need to maintain it going forward. By doing so, you can:

The average organization has been found to waste more than $135,000 annually on unused, underused or duplicate SaaS tools. But with full oversight of your tech stack and a solid understanding of software usage across your business, you can eliminate this unnecessary expense.

To do this, you should start by identifying whether there are software applications being subscribed to that are either no longer required, or that include more licenses than are needed.

Similarly, there may also be instances where you are paying for multiple subscriptions of the same tool, something known as SaaS duplication. The software apps most at risk of this are those that are used across multiple departments, for example project collaboration software, or even a tool such as Adobe Acrobat Pro.

It’s not just duplicate apps you need to be aware of though, it’s also redundant software applications — those that effectively do the same thing, or that have overlapping functionality.

By pinpointing these tools, you can better manage your IT budget, ensuring that you’re only paying for what is needed.

When it comes to renewing your software, it’s important to be aware of any auto-renewal clauses in your contract. In fact, given that 89% of vendors include them, you could be caught off guard and end up committing to a subscription you no longer need, at a price that’s likely higher than it needs to be — data suggests that buyers are overpaying for SaaS by as much as 30%.

Which is exactly why you need to allow yourself enough time to evaluate usage and spend, identify duplicate and redundant applications, and ultimately determine whether or not you actually want to renew your subscription — and if so, on what terms.

As part of your software negotiations, you should request that any auto-renewal clauses are removed from your contract. In almost all cases, the vendor will comply, however if they don’t then you should ask that they include a clause requiring them to contact you 90 days ahead of the renewal date, in writing, to remind you of your upcoming renewal.

It’s not just time you need though, it’s also leverage.

Arming yourself with economic data is one way to tackle negotiations, but there are certainly other levers you can use, such as committing to longer-term contracts for a better rate and finding out ‘real’ vendor pricing, in other words the prices that other companies are actually paying.

One of the biggest challenges for any SaaS buyer is the overwhelming lack of pricing transparency in the market. In fact, with as many as 55% of vendors obscuring their pricing, you are often left with no frame of reference, making it incredibly difficult to leverage the best possible cost.

Sure, you may be able to scrape information from some feature comparison sites or find an outdated reference to a vendor’s pricing on a forum, but this data is often fragmented and unreliable.

Which is where Vertice comes in. We provide validated pricing insights and discounting data from thousands of SaaS transactions, giving you the leverage you need to negotiate the best possible deal.

But that’s not all we do.

At Vertice, we also recognize that effective SaaS management requires time, which is why we take the burden of managing, buying and renewing SaaS off your hands.

See for yourself how much we could save you with our free cost savings analysis. Alternatively, take a look at our latest SaaS Inflation Index report. 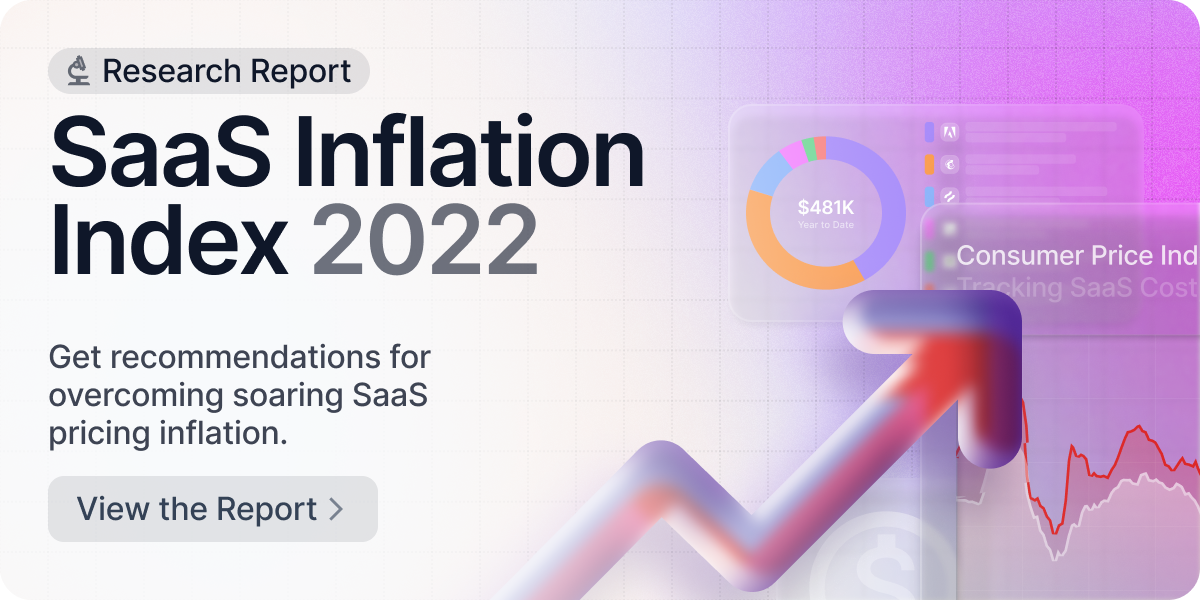